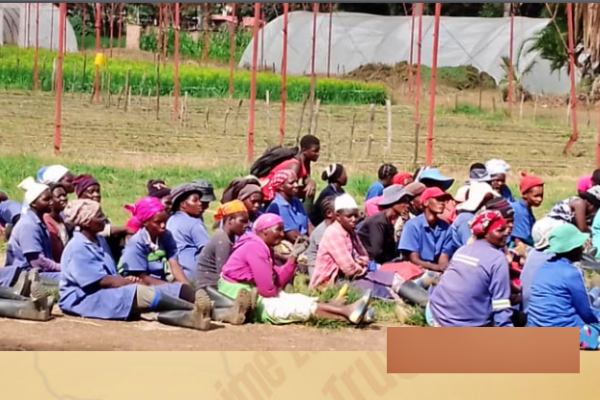 From February to April 2022 Patsimeredu Edutainment was commissioned by IFWEA to run a worker’s education programme, targeting workers on five farms and in five companies in and around Harare. The project was done in partnership with Zimbabwe Congress of Trade Unions (ZCTU) and General Agriculture and Plantation Workers’ Union of Zimbabwe (GAPWUZ).

The aim was to use theatre and other communication strategies to promote worker education and stimulate dialogue amongst workplace communities, around issues such as workers’ rights, sexual harassment and women empowerment.

The majority of audiences came through farm gatherings.  Within the farms that Patsimeredu Edutainment had engaged with, they learnt of the need to reach people within farming compounds surrounding the farms. This group of people constitutes informal traders, brick layers and general housewives. The recommendation to reach them came through farm managers who said that this group of people were equally affected by the issues we were discussing in the plays.  Every farming season the same group of people become farm employees as contract workers, and issues raised in the plays such as workers’ rights, worker’s exploitation, sexual harassment and sexual transactions for favours were issues that affected many of the workers.

Outcomes of the programme included an increase of knowledge amongst the target groups with regards to topical issues such as health and safety, SRH, women empowerment and gender based violence prevention.