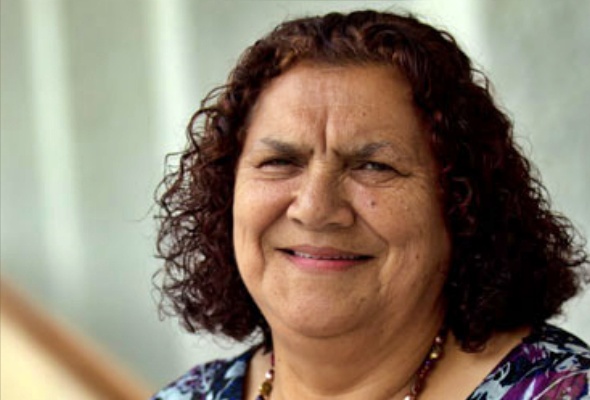 Myrtle Witbooi, a pioneering leader of the domestic worker movement died on January 16 2023 in Cape Town at age 75. Under South Africa’s apartheid rule, she began to organise women in the garage of her employer and went on to become president of the first global union led by women.

For 52 years she advocated for the rights of domestic workers, upholding her presidency in both South Africa’s national union of domestic workers and the International Domestic Workers Federation throughout her struggle with a rare form of bone cancer.

A fierce grit and unwavering commitment to the freedom struggle anchored Ms. Witbooi’s entire activist life. “Because of my voice, I was determined, and I didn’t let anything stop me.” She spoke out for equality, gender rights, and labour justice, carrying the banner “women won’t be free until domestic workers are free” throughout the streets of South Africa, and later the world.

Sahra Ryklief, IFWEA General Secretary and longtime comrade and friend of Myrtle, says: “A giant has fallen! Myrtle Witbooi, founding President of the International Federation of Domestic Workers and General Secretary of the South African Domestic Service and Allied Workers Union (SADSAWU), passed away this week after battling a rare, malignant cancer.

Myrtle was an iconic figure in the South African labour movement. She was a stalwart, a veteran, steeled in decades-long battles for decent wages, working conditions and social protections for domestic workers – the majority of whom are poor black women. She brought this wealth of knowledge and experience into the global labour movement, emerging as a leader in the first international labour federation run by women for work dominated by women. Her legacy lives on in the improved livelihoods and protection of those she represented.

Rest in peace dearest comrade Myrtle, you will be sorely missed.”