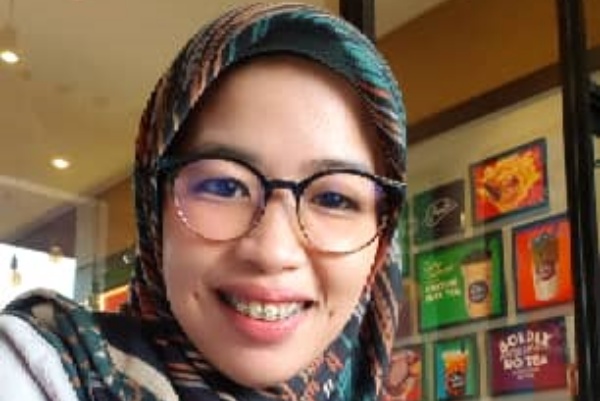 Bariyah Iyah, from the International Domestic Workers Federation (IDWF), is part of the IFWEA Study Circle on Migrant Workers’ Rights, in the Malaysia group. The study circle began in August 2021, and involves domestic workers in different countries. She speaks about her work and how the study circle is going:

Bariyah is an Organiser with the International Domestic Workers Federation (IDWF). She is based in Jakarta, Indonesia, and her main job is to organise domestic workers from Indonesia in Singapore and Malaysia, as well as working with Filipino migrants in Malaysia and Singapore.

Bariyah is a migrant worker herself, having worked in Kuala Lumpur, Malaysia, between 2007 and 2009 in the manufacturing sector. “I worked there due to the economic situation in my family – my parents were from a poor family, with no steady income.” However, in 2009 the global financial crisis struck, and Bariyah  and many of her colleagues were sent home before their contracts ended. “But we decided to fight for our rights,” says Bariyah. “Myself and about 100 other people, we were fighting for one year for compensation as they ended our contracts early. I was trying to organise with my friends.”

Passion for this work

Bariyah then worked as legal aid staff and social mobiliser for various NGOs in Indonesia from March 2012 to November 2018. In December 2018 she joined IDWF. “My passion for this work, especially taken my experiences as a migrant worker, and my work as a mobiliser, made me reach out for this opportunity. I knew I had to do it!” she smiles.

She got involved with the IFWEA Study Circle on Migrant Workers’ Rights in 2021. She is part of a group of around 13 people from Malaysia and Singapore. “We are keeping it small, so that we can have a deep focus on the topics, and also manage any technical issues,” Bariyah explains.

The study circle takes place online, with most participants joining with their cellphones.  Last year, areas of focus were identified. This year, they will tackle one particular issue to start with – taking a day off. “No specific campaign, that I know of, is looking at this. And it is very important. We want to make contact with labour departments, with policy makers and other stakeholders,” explains Bariyah.  And engage more migrant domestic workers to be aware of their rights.

She thinks that connecting with other study circles working on similar issues makes sense.  “It’s good to compare and share notes. Do we have the same goals? If we have, it makes it easier to work together across groups and countries,” she says.

While working together online has the advantage of linking people from other areas, it does also have challenges, Bariyah admits.

“Learning how to use the online platform has come with some technical problems, such as losing internet connectivity – and losing passwords,” she says. Also, while study circles are conducted in home languages, some of the instructions are in English, or the translations from English to Bahasa are not clear, which can be a challenge.

But on the whole, Bariyah has found the study circle to be a great experience in collective learning. “This is relatively new to me, but I enjoy the process of collectively talking about a concept, and a context, as well as doing practical work,” she says.