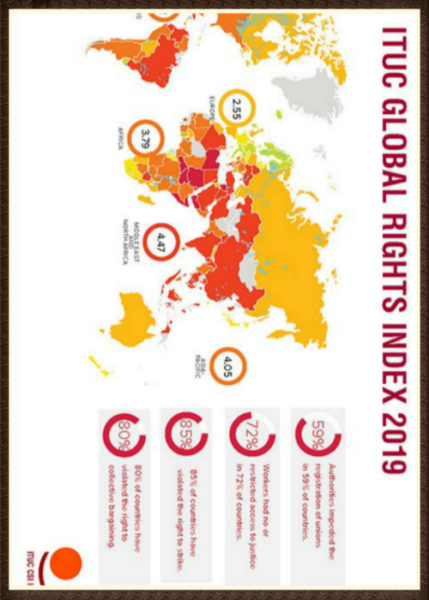 THEME: Collective Bargaining and Workers’ Rights in the Workplace

WHO IS THIS FOR? This publication is aimed at worker educators, labour academics, researchers and trade union leaders.

It documents violations of internationally recognised labour rights by governments and employers. Amongst the findings are that: The worst regions for working people are the Middle East and North Africa; Trade unionists were murdered in 10 countries; The world’s ten worst countries for workers include Brazil, Turkey and Zimbabwe; and 80% of countries have violated the right to collective bargaining. Sharan Burrow, General Secretary of ITUC, says: “Trade unions are on the front lines in a struggle to claim democratic rights and freedoms from the corporate greed that has captured governments such that they act against workers’ rights. We need a New Social Contract between workers, governments and business to rebuild trust as people lose faith in democracies. It’s time to change the rules.”