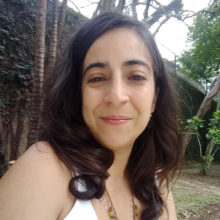 I am the StreetNet International organizer for the Americas. I am a sociologist, specializing in the sociology of work and urban planning, and a human rights activist, focused on urban worker struggles. I’ve been working with social movements for the last 10 years. I started my career at the Central Única dos Trabalhadores (CUT) in Brazil, which led me to develop an interest in studying street vendors, work in the informal economy, and public policies concerning rights in the city; then in India (Global Labor University / Tata Institute of Social Sciences 2008-2009); and later on I did a master’s degree in urban and regional planning in Rio de Janeiro (IPPUR / UFRJ 2012-2014), focused on exclusionary processes and established rights violations brought by the 2014 FIFA World Cup. This study resulted in the beginning of my work with StreetNet International in 2011 in Brazil, which led to the building of articulation and dialogue with leaders of grassroots organizations in the informal economy and advocacy. This work resulted in the creation of UNICAB, Brazil’s street vendors national organization, today a member of StreetNet. After this cycle, for five years I worked as an international advisor and later in the general coordination of the Brazilian Association of Non-Governmental Organizations (ABONG), representing CSOs in the field of defense of rights and defense of the commons. This work inspired regional partners of Latin America and the Caribbean and global civil society in this field to share experiences and information on international advocacy actions. In 2017, I started work as an organizer with StreetNet, deepening my experience as a popular educator, which has been developed in the construction of Brazilian urban social movements, under the teachings of Paulo Freire and the grassroots education methodologies of Brazilian civil society.

We as an organisation believe that Street Net international can play a very important role in the building of IFWEA, because of what we have been establishing in informal economy work educational methodology. Street Net has developed a very innovative and powerful course on negotiation skills that systematises the best practices we have seen in our field. Using strategic thinking and organising methods informed by a democratic and participative conception of educating, it has been presenting successful results.

This new methodology should be of interest to the international trade union movement, especially the more traditional elements which may find this a useful approach to engage with the future of work. As a grassroots organisation that uses popular education with informal economy workers, we have much to exchange with and learn from other trade union organisations and their popular educators. Last but not least, we would want to continue the exchange by our fellow Street Net educator Sibailly, recently retired.