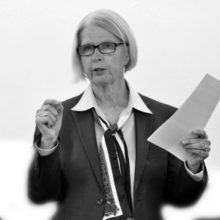 Professor Susan Schurman is IFWEA President and Distinguished Professor of Labor Studies and Employment Relations in the School of Management and Labor Relations at Rutgers, The State University of New Jersey and a former Dean of the School. Her academic career includes her position as the founding President of the National Labor College, past President of the United Association for Labor Education, and former board member of the Labor and Employment Research Association. She speaks about her experience:

Can you please tell us about your background?

I grew up in a very small town in Michigan – a very conservative part of the State.  My father was the high school football, basketball and track coach – he’d gone to college on the GI Bill after serving as a Marine in WWII.  My mother worked as a school secretary. My Dad’s father was an evangelical Christian preacher and my Mom hailed from a large clan of Irish famine refugees who acquired land in Michigan under a Congressional land grant act in the 1860s and became cherry farmers.  I was able to get a scholarship to attend Michigan State University after graduating high school.

You have a very distinguished career in the field of labour studies and education. How did your interest in this field arise?

My father had organised the teachers in our little town into a union when the State of Michigan enacted public sector collective bargaining in the early 1960s. I finished college during a terrible labour market, moved to Ann Arbor Michigan where there was a lot of political and feminist activism. I ended up working in restaurants and then getting hired as a bus driver – at a time when very few women were drivers. There was a union at the transportation company and I got involved and got elected president of the union when I was 26 years old.  Apparently I was the first woman to be a transit union president – at least since WWII when there were more women driving.  I took some classes from the University of Michigan Labour Studies Centre and was asked to do some teaching in the workers basic studies program.  I loved it and the Director – a great worker educator named Hyman Kornbluh – convinced me to study for a doctorate in adult education. He and his wife, Joyce Kornbluh – another great worker educator – mentored me and when they retired I was asked to become the Director of the University of Michigan Labour Studies Centre.

You have particular expertise in union effectiveness and workplace safety and health – can you tell us more?

While I was at the University of Michigan Labour Studies Centre the United Auto Workers started their joint labour-management initiatives with the auto companies.  Our Centre was part of helping to design a lot of important health and safety training initiatives – “right-to-know,” ergonomics etc.  I also lead a research project studying the effects of work organisation on physical and mental health.  At the same time the economy was changing due to globalisation and unions were losing members – and failing to adapt.  I studied organisational psychology as part of my doctoral program and I became interested in how to help unions adapt to changes in the environment.

And your focus on organising in the informal economy?

It became clear that companies were dismantling the old model of employment and escaping unions and labour laws by various forms of informal work.  I became interested in new forms of collective action and negotiation outside the formal system.  My involvement in IFWEA helped me see these issues long before a lot of my US colleagues were paying attention.

Have you seen the labour studies and education field grow, over time?

In the United States the field – as we used to think of it – has not been growing. In fact it has been declining.  However the study of labour and work issues is growing in many other disciplines.  Labour Studies has been slow to adapt and US unions have disinvested in their education programs.  I am encouraged by the success we’re having in IFWEA in other parts of the world – especially in the informal sectors.  I think our leadership will make a difference.

Would you say you have seen an increase in the amount of women involved in worker education and labour issues? And an increase in gender-based awareness?

There are certainly more women now – there were very few when I first got involved.  And there is an increase in gender awareness.  I also believe there will be an increasing awareness of race and ethnicity etc in the next few years.

To what extent has the work you have been doing been impacted by the Covid-19 pandemic, and what major issues/challenges have arisen, that will require new forms of attention?

Covid has had one major very positive effect:  it has demonstrated the value of virtual learning and the possibility of doing our work as worker educators using the participatory and interactive methods that are our tradition, in new ways. This is allowing us to reach more workers.  It is the biggest step toward democratising access to learning since the printing press.

What is the importance of IFWEA, as we move forward? And the value of worker education locally and globally?

IFWEA has demonstrated our leadership capacity to advance the cause of worker education globally.  This is due to the brilliance of our staff and the steadfast commitment of our Executive Committee and the support of our member organisations.

Could you share one or two highlights of your career, to date, please?

Certainly the honour of serving as IFWEA President during this past nearly 15 years is a major highlight.  Serving as the founding President of the National Labour College here in the US was another highlight.  Although the  Labour College did not survive – the core ideas of the model are now becoming accepted parts of postsecondary education in the US:  credit for prior learning, easily transferable credits from other institutions, pathways to obtain credentials, non-traditional instruction including virtual.  We are now having conversations about a National Labour College 2.0 here in the US.