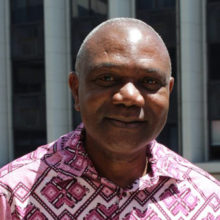 Sibailly Maximilien Douhouré has been Organiser & Educator at StreetNetInternational, and is outgoing IFWEA Executive Committee Member – elected at the General Conference 2015 in Peru, and serving until2018. We thank him and pay tribute to his commitment. Read about Sibailly’s journey as a telecommunications engineer to organiser and educator – taking him from Côte d’Ivoire to France, across Africa and the globe.

Can you tell us about your background – growing up and how you were educated?

I was born on June 2nd , 1951 in Gagnoa which is 300km from Abidjan. Asa young person, I attended primary school in a small village called Yopougon which has become one of the biggest districts in Abidjan. I was brought up by my Uncle who was a teacher.I completed Senior High School at Technical college of Abidjan where I got the BaccalaureateE in Mathematics and technical studies in 1973. From 1975 to 1981, I attended ENSPT of Abidjan and continued in France at ENSPTT (Evry) where I graduated with the Advanced Diploma in Engineering in Telecommunication after six years.

Starting work life – Then in 1982, I flew back in Côte d’Ivoire and got my first job at the National Corporation of telecommunication of Côte d’Ivoire as Engineer for ten years.

At that time, it was a state company but for about ten years now , the telecommunication sector has been totally privatized.

How did you join the labour movement and become an educator?

In 1983, I joined SYNAPOSTEL, the national union of postal and telecommunications workers. Later in the same year, I participated in the national congress of my union as representative of the company’s senior staff and was elected as executive board member in charge of research and education.

In 1985, I went back to France for various trainings about union education supported by two French national unions( FO & CFDT) for one year. So those trainings enabled me to understand the tasks and duties of the union trainer and I therefore became an educator.

Working with global unions – From 1988 to 2005I worked with Posts, Telephone and Telegraph (PTTI) which firstly became International Communication (IC) and Union NetworkInternational (UNI) afterward . A few years later, there was merger of several organisations. As head of Abidjan sub-regional office, my main tasks were: representative of the 3 global union federations,writing and implementation of projects, and facilitation of workshops in the French speaking countries of Africa.

Working with IFWEA affiliate StreetNet in Africa -In addition, I started working with StreetNet in January 2009 as organiser for Africa and in 2013, I was nominated as global educator. As educator, during the 5 last years, I organised seminars for the affiliates, discuss trainings during meetings and I also advised on training needs.

I believe workers education is important and it’s been my mostinteresting experience working in StreetNet, and I believe in what StreetNet is doing.

What is the power of education, in your experience?

Education is the key to success, moreover it’s the light that opens people’s eyes to their rights and privileges. Every change starts with education – it is the foundation of all development. When members are well trained their unions become strong.

What are the education activities that you have practiced in your work and activism in the labour movement?

I always organise seminars or meetings with participatory methods and I also use the study circle method. These methods are more like a conversation, a sharing of ideas. For example, the online courses established by IFWEA is a good example of the methodology in action. It has value in that it’s simple and less costly since many people use the internet. Ina democracy, when many people are educated , it enables solid social development. The more the people are well educated , the better.

What is the value of worker and popular education for solidarity locally and globally?

I am glad to have worked with the IFWEA community and I would like to thank IFWEA educators for their collaboration. I wish that the good atmosphere that reigns in the community will enable it to emerge and reach its goals.

I also think that IFWEA is on the right track concerning popular education. Informal workers should take advantage of the IFWEA methods to upgrade their knowledge. Therefore, I would like to urge StreetNet affiliates to get involved in the in the education programmes of IFWEA.