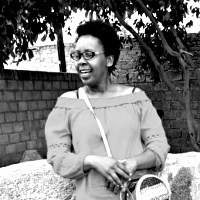 Lorraine Sibanda Ndlovu is the National President of Zimbabwe Chamber of Informal Economy Associations (ZCIEA) and President of StreetNet International, both IFWEA affiliates. Based in Zimbabwe, she is passionate about the rights of informal economy workers, having first-hand experience of the sector, and is equally driven to make sure the voices of women are heard:

“You have to be a bit crazy! And a bit stubborn! You need to go out of your way to be different, in order to survive as a women leader,” says Lorraine. As the first African female President of StreetNet, she has been involved as a union and community activist since an early age. She acknowledges that it is particularly tough for women to forge a leadership path. But, it is vital that they do. “There’s higher percentage of women in the informal economy, so there’s no reason to have mostly male leadership. Women should be encouraged to step up and lead,” she states. And, she is proud to say, investing in the education of women through presentations, discussion sessions, and information on topical issues, has made a noticeable difference.

“Creating space for women to know their rights, and to become leaders, is important. It has also been a very enrichening experience – women appreciate the information we share. The result you see are women who are actively engaged as citizens,” says Lorraine.

She first became involved in worker struggles when she worked in a factory, straight after school.  “I have a dangerous streak – I’ve always been one to stand up for my rights. I get really worried when I see people being abused. Which is what was happening in this factory, the working conditions were not good. A senior worker recruited me into the trade union, and I fell into place like a piece in a jigsaw,” she smiles.

From student to informal sector leader

From there, Lorraine went to university to study teaching, and became the first woman President of the Student Representative Council, leading over 1500 students. She enjoyed working as a teacher, after university – but eventually resigned in 2007 due to challenging circumstances at the school she taught. “The pupils were promised materials, but nothing was delivered. There were no books, no learning materials. I started writing books myself, for the children. But eventually I had to leave- we also weren’t being paid,” she explains.

Lorraine had always been involved in the informal sector, as both her parents were informal workers. She returned to this – sewing, dress-making to order, baking – and was drawn to the Women’s Coalition, becoming the chapter chairperson in Gwanda. She did many activities educating women on women’s rights, policy, and constitutional education. At the same time, she was also focused on building the Zimbabwe Chamber of Informal Economy Associations (ZCIEA) in Gwanda. ZCIEA is an affiliate of StreetNet International.

In 2015 Lorraine was elected ZCIEA National President, and in 2016 she was elected President of StreetNet, re-elected to the same position in 2019. As an informal worker herself, she has been well placed to lead both organisations.

Nothing for us without us

“Recognition and respect – that’s what we ask for. People talk of formalisation, but it is more than just registering and paying tax. We need policies that are friendly, conducive and relevant to the informal worker situation. In most countries in the world, the informal sector growing; and there is often a decrease in the formal sector (due to neo-liberalism, changes in the workplace, and other reasons). Even those in the formal economy are not all covered by formal arrangements,” says Lorraine. “The easy way out for governments is to deny the informal economy. This must be addressed. As the StreetNet slogan says: Nothing for us without us.”

The Covid-19 pandemic has created many challenges for both ZCIEA and StreetNet, from problems of organising to harassment of traders on the streets. “I won’t lie, it has been really, really difficult,” says Lorraine. “And this is the time that people look up to you as a leader, they need good leadership.”

Adding to this pressure, Lorraine had her own pain to deal with when her husband passed away very suddenly from Covid, just before the new year in 2020. “My husband fell sick on the 25th of December, and he went to hospital.  After three days he was feeling much better – but on the fourth day he died,” says Lorraine.

She is still dealing with the grief, as well as the practical fallout of losing a spouse. “There are a lot of patriarchal issues that are faced when this happens. In a way I am grateful for the experience –it has put me in a better position to understand the situation of women who lose spouses, to understand the struggles and issues that we grapple with at a personal level,” she explains.

Activist, leader, warrior spirit – Lorraine Sibanda Ndlovu is all this. She’s been called a superwoman, and it’s easy to understand why. We salute you!