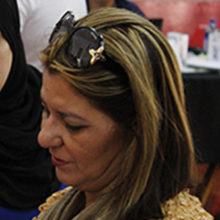 On INAESIN, and how they work:

INAESIN started working with the federations, with the unions at their headquarters. The educators are a mix of union leaders, academics (professors) from university, and young educators from the unions who come from all over the country to facilitate the courses. Through funding they can pay for trips and accommodation and the headquarters, and they raise funds for project activities and exchanges. INAESIN has a lot of years and influence and has worked with almost all union headquarters with no regard to ideology. Most union syndicate leaders have been educated through INAESIN. IFWEA’s education methodology is similar to what INAESIN does.

On working in the region in Latin America:

It is possible, even though it is a struggle you can do it, we do our work and we do it all over the country, we are travelling inside the country, we also working in other countries throughout Latin America – in the Andean region. For example my base union is Health and is affiliated to the PSI (Public Services International), and we have had the opportunity to share with all the countries in the region through Simón Bolívar University.

On working with the political challenges in Venezuela:

We’ve been struggling with that for 80 years, with the repression and the obstacles. Regardless of that we have been able to do our job, and continue to do it. So regardless of the situation we’ve been able to do our work no matter how hard it gets, sometimes it is hard, sometimes it is not so hard, doing the job, that’s what the union fight is about.

On the importance of internationalism and the global network of solidarity:

It is important for us to have the symbolic help and support of all the members of the unions you work with, and partner organisations that you work with; and that the world organisations know what we are going through, the workers and unions in Venezuela. Because the government has a communication platform that shows everyone everything is just fine, that nothing is happening.

That’s the window we have in the international organisations. We make the formal accusations for the union workers from the jail, about the interference in the election – we can do this with the other global organisations that the unions are affiliated to, the global unions.