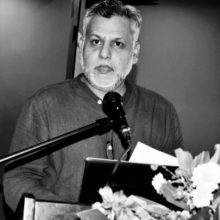 Khalid Mahmood is an Executive Member of the IFWEA Executive Committee. Since 1996 he has worked for the Labour Education Foundation (LEF), which is focused on building a democratic labour movement in Pakistan. He is currently Director of LEF. He speaks about the work he does, and how he became involved:

Please tell us a bit about your background?

I was born in Karachi, and got my primary and secondary education in Karachi and Khairpur. I then moved to Lahore and completed my graduation. I belong to a working-class family – my father was a soldier in the navy and my mother used to work as a home-based garment worker. But I was fortunate to get at least a college degree with support of my family; I could not go to a regular university but alongside my work I was able to complete my MBA through evening classes.

How did you come to be involved in the work you do, with trade unions, worker organisations and rights organisations?

I had an interest in student politics when I was studying in college, but my involvement with the trade union movement and labour rights started when I was offered a job as accountant by the Labour Education Foundation, then the Education Foundation, in 1996. At that time I was driving a taxi in Lahore while studying cost and management accounting. I was engaged by the organisation to provide a transport service to trade unionists from the Swedish Teachers Union who were visiting Lahore to start projects with the Education Foundation. The connection established with trade unionists from Pakistan and Sweden resulted in my job as accountant with the foundation. The projects included schools for child labourers and adult literacy centres for workers, which paved the way for my interest to become a labour educator.

Can you explain to us what LEF does, and your role here?

LEF’s main work is to support workers to organise; the capacity building of trade unions and workers’ groups from the informal sector; providing legal support to workers and trade unions who are in need of support due to their protection of labour rights; and research and advocacy on labour rights. LEF has also worked on the issues of child labour, sexual harassment and gender equality.

As a labour educator and activist, what are the biggest challenges you face?

The biggest challenge in Pakistan is the non-implementation of the labour laws. Pakistan has relatively good labour laws but there is no political will by any government to implement these laws. The absence of freedom of association, and of collective bargaining for the majority of workers is another big issue. Pakistan has still to see a true democratic culture develop from the grassroots level aimed at developing a democratic labour movement for the protection of labour rights for the majority of the population. The undemocratic behaviours within government systems and society are a great hindrance for the labour educators and activists who want to bring labour voices to the forefront. Another challenge is the lack of opportunities for women to be involved in the world of work, and to get involved in organising and trade unions. The reasons behind this situation may be found in social, economic and cultural values imposed on the working class of Pakistan by the ruling classes.

Why is it important to unite Asian worker rights organisations with those in the global south and north?

As Asia is called the “factory of the world”, it is important that workers producing different items in factories in Asia are linked strongly with the workers consuming those items in the developed world. The situation of workers in Asian countries is actually not all that different when it comes to the protection of labour rights; the policies resulting in shrinking spaces for the independent voices of labour organisations working in Asian countries are the same in many countries.

In this situation, it is very important for the workers’ rights organisations to come together to not only find strategies to tackle the shrinking spaces in their own countries but also to see methods for countering the onslaught of global capital on labour rights in Asian countries. Organisations like IFWEA have an important role to play in Asia in bringing together worker education organisations for building strong linkages and developing strategies and action plans for the protection of labour rights.

Developing education tools for workers has always been important, but would you say this has become even more in focus during these months of the pandemic?

The pandemic has shown us that even in this horrible situation capital finds a way to continue making profits, but at the cost of even greater exploitation of workers. In this situation the tools of worker education have to be shifted to more technology based education. Worker educators have a great responsibility to learn distant learning tools for reaching out to workers around the globe. Information technology is not only important to get knowledge of the situation of workers, but also for educating them to get out of their difficult situations.

How do you see the role of IFWEA in terms of it being part of the global worker education community?

IFWEA is the only platform available for worker educators around the world to come together and learn from each other. In the past few years IFWEA has developed, through its affiliate organisations, a much broader reach into the informal sector. This has a lot to do with the fact that IFWEA understood the need for information technology and online tools for worker education a long time before the pandemic.

I think in future IFWEA has even a greater role to play in worker education by fulfilling the needs of trade unions not only at country level but also at the global level by involving Global Union Federations and regional networks.

Looking forward, IFWEA needs to continue to develop worker education online platforms in such a way that even uneducated workers can utilise these platforms by learning some basic skills.