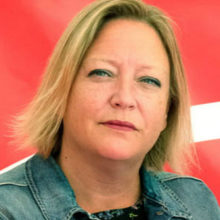 Helen Petersson is President of ABF (Arbetarnas Bildningsförbund – the Workers’ Educational Association), a Labour Member of Parliament in Sweden, and Vice President of IFWEA. She tells us how she came to be involved in worker education:

Can you please tell us about your background and education?

My background is actually a story of workers education.
I quit school as soon as I possibly could, at 16, and started working housekeeping at a hotel in my hometown in northern Sweden, Umeå.
There, I became a member of the labour union, and from then on informal education has been my university.

You have been President of ABF since 2012. What has your role been, over this time?

It took ABF a century to get a female President, so being elected president was not only of importance for me but also historical for the organisation.
The main challenge has been to translate our values and ideas into a new context.

Two noticeable examples when flexibility has been required and we have had to renew ourselves during this period was first during the refugee fall of 2015, when Sweden was one of the last countries that kept their borders wide open.

During what felt overnight, 163 000 refugees came to Sweden, and all of a sudden the need for ABF to effectuate our high values was enormous. With very short notice, we started offering courses in Swedish and cultural know-how from day one of arrival.

With tremendous work from everyone, from the federal board to tens of thousands of volunteers, we managed to actually make a big difference.

The other example is, of course, the pandemic: When having hundreds of meeting spaces around the country, what can you do when all meetings are cancelled? That is an ongoing process, but maintaining our values and methods in a new context is the challenge we are in right now. Not only challenging but also inspiring.

Can you briefly explain what ABF does?

ABF is the education wing of the broad labour movement, even if our courses and events are not limited to labour education. Among the more than 70 000 courses/study-circles and 100 000 events we conduct every year, all imaginable subjects and topics are represented.
We have activities in all 290 municipalities, 365 days a year.

You are also MP for the Labour Party – what are your chief goals, as an MP?

At the moment my responsibilities are labour law, where major changes are taking place at the moment. My aim is to maintain a great influence for the unions at the workplaces, as has always been my key commitment.

What would you say are the major challenges facing workers and worker education in Sweden – and Europe in general?

There are several challenges, but I think the most important right now is the battle between knowledge and ignorance, that personally I could never imagine would happen in my lifetime. On the global arena, a clear example was when Trump on a rally threatened voters that: “If Biden wins, he will listen to scientists”.
On the grassroots level, we see it in growing conspiracy theories and fact ignorance.
Our movements used to fight for the right to knowledge, now we are fighting a battle for knowledge itself.

How much are you linked with other similar organisations in Europe?

Our most frequent international co-operations and projects are outside Europe, but we are members of EAEA (European Association for the Education of Adults) and ABF Norden, a regional network for our Nordic sister organizations in Finland, Denmark, Norway, Iceland and Åland.

How important are global networks of solidarity – and organisations such as IFWEA?

ABF is, acts and thinks as a part of a global movement, and IFWEA is by far our most important global partner. Almost all our international co-operations are with other members of IFWEA.

What message would you like to give to educators in our global community?

Looking at the world today, some people seem to fall into despair.
We must not.
Our joint history is a history of struggle, and that struggle has never been easy and it has never been easier than today.
When looking back on the victories we have achieved, we should look at then not as something we managed, but as inspiration for the victories yet to come.